The personal trainer is back.

So today it was back to exercise again, though I will admit that a lovely walk in the autumn trees can’t really be "exercise," now, can it? We stopped and sat on a bench overlooking a marsh where there was a riotous cacophony of birds singing their hearts out. You couldn’t see any of them, because they were all hidden in the bullrushes, but occasionally a red-winged blackbird would fly up and across to the other side--perhaps going to visit another bird family for tea.

We stopped by the freeway where many of the trees are starting to change color, and we took photos. Peggy did some fancy stuff and tried taking pictures through the lens of her sunglasses. The results were pretty striking.

Mine were a bit more down to earth, though I do like this one of Peggy. 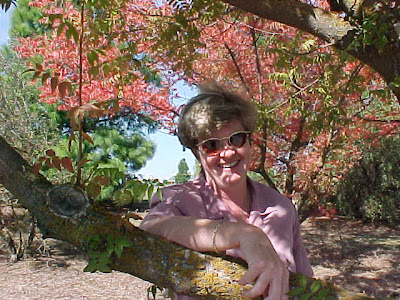 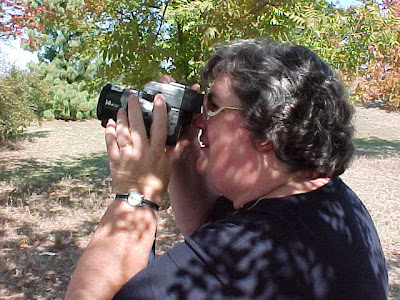 We rushed home so we could get to the theatre in time to see Dr. T and the Women, the new Robert Altman film which Peggy wanted to see. It has an amazing cast--Richard Gere, Helen Hunt, Shelly Long, Laura Dern, Farah Fawcett, Janine Turner, and some others. The opening scene had me giggling, with all the women in the waiting room of the gynecologist’s office. Brought back a lot of memories of my old job.

Altman started to lose me in the first scene, with Gere doing a pelvic exam on an older women, obviously very nervous, and without a nurse in the room. In fact, the nurse excused herself for barging in unexpectedly.

Basically, though reviews for the film have apparently been good, I was falling asleep and Peggy was grumbling "this is rubbish" throughout most of the first hour until we finally decided that it was a waste of our time and we left. I can’t remember the last time I walked out of a film. But unless you’re a big Altman fan, I’d give this one a wide berth.

Instead we did mundane things--we to the grocery store, bought gas, came home to do laundry and (for Peggy) ironing. She set up the ironing board out on the patio, so she could iron al fresco. 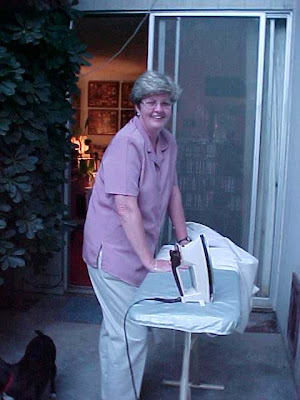 Tomorrow we fly off early in the morning for Seattle and we’re trying to get ready. For me "getting ready" means writing the second of two feature articles I have to turn into the newspaper before I leave (the first one was easy--it was on Steve and I could write it in my sleep), and finish at least one more transcription. For right now I’m just trying to stay awake long enough to stick clothes in the dryer so I have something dry to take with me to Seattle.
Posted by Bev Sykes at 6:26 AM