Where the Wild Things Are

We are, as Peggy says, "stuffed" (which I am assuming means "exhausted"). We have had a full day, but it was a great one.

But let me start at the beginning. We got on the road early for us--9:30--and drove to Escondido, to the Wild Animal Park (we didn't get lost). On the way we passed a huge ostrich ranch--the first I'd ever seen.

It was either a great day to be at the park, or the place is so huge that you just never feel you're there in a crowd. We started out by taking the tram tour--an hour around the park, to give you an idea of what's there and where. It's so huge it's impossible to do it all in one day. The place opens at 9 and closes at 4 and we didn't make a dent in the possible things to do. But we got a great feel for this wonderful park, where the animals live under as much "normal" conditions as they would in their native habitat.

One of the fun things we did was to feed the lorikeets. These colorful birds are native to Australia. To pass through their enclosure is free, or you can buy a little cup of liquid food to take in with you. If you have a cup in hand, you will be covered with birds very soon. They perch on your arm, your arm, your hand, your shoulder, your head--sometimes all at once. Trying to take pictures of each other was fun, since we were covered in birds at the time. 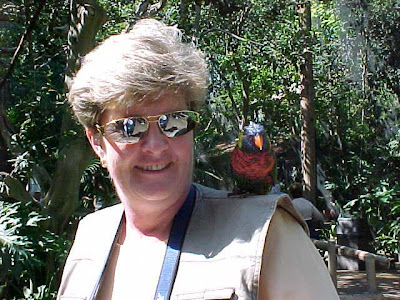 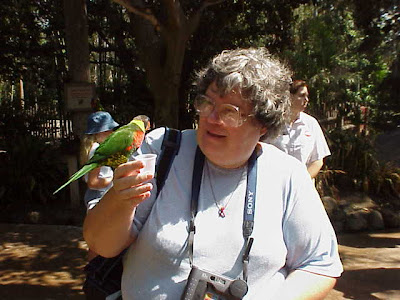 Next we spent a lot of time at the gorilla habitat. In contrast to the small enclosures we saw at the Sacramento Zoo, the animals here have as close as possible to what would be their habitat in the wild and it was a delight to watch the interactions among the group, the old silverback staying on top of the antics of all the younger ones, and especially keeping the young adult males in tow, while the old pregnant females sat off to the side chewing bamboo and probably talking about what to name the babies. 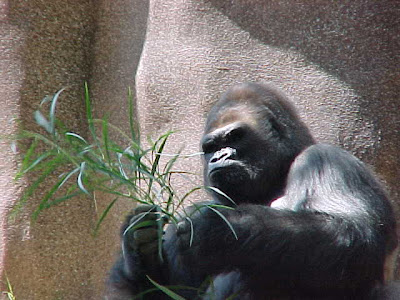 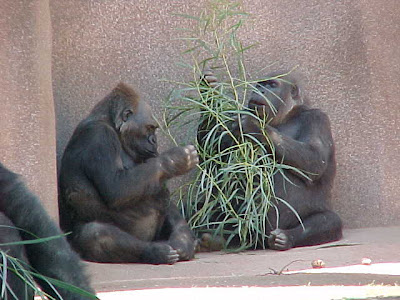 And then we set off on foot for Africa. It's a mile and a half trail that wends its way around the park. But it goes in so many directions, it's hard to know really how far you go. We didn't cover nearly the whole thing, but did see the things that most interested us. I thought I was keeping up pretty good until Peggy stopped to take my picture and said that my face was beet red. I suspect that a part of the reason we spent so much time at our next stop (the elephant pens) was because she was trying to give me a chance to catch my breath and get back some normal color. 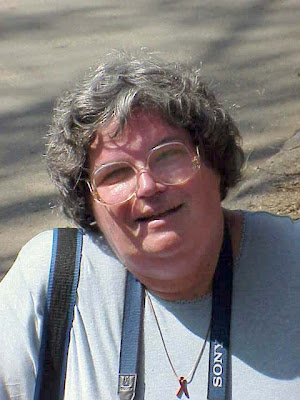 We spent a lot of time watching some African elephants and each took about a disk's worth of photos (I thought Peggy's photo of some butt-sniffing behavior might interest Ned). 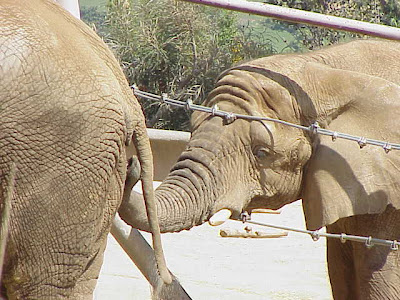 They were just great, and it was especially nice when one youngster came over to where we were standing and stood directly beneath us begging for food (which we didn't give). At another spot in the park, apparently you can feed giraffes, but we didn't get that far today.

Our last animal visit was to the Meerkats, who are such fun animals, and then the traditional half our in the gift shop after which we staggered to the parking lot and came home again. We were very definitely "stuffed."

Dinner was leftovers from last night, so we didn't have to go out for food. Then we settled in to watch The Olympics. Fantastic closing ceremonies, but I have to admit that I will not be shedding any tears at missing Bob Costas' voice in the next week...and I hope we have seen the last of the "tribute" montages. The athletes were all great, but the coverage left a lot to be desired, especially for Peggy who had no idea that she would be getting such terrible coverage in this country.

Tomorrow the plan is to do the San Diego Zoo. We are a bit dubious, though, because we were told that admission is free tomorrow, since it's "founder's day," and that it will be very crowded. I suspect that comparison of the two parks will put the Wild Animal Park waaaaaay ahead of the zoo for satisfaction of experience.
Posted by Bev Sykes at 12:43 AM