Today was Jelly Belly day. We left Davis in the late morning and drove the 20 miles to Vacaville, where we took a tour of the Jelly Belly factory. 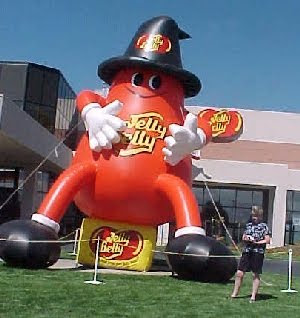 We started out with lunch in the Jelly Belly cafeteria, and my cheeseburger was jellybean shaped meat and came on a jellybean shaped bun. Peggy’s sandwich was just sandwich shaped. She forgot which country she was in, though, and ordered "chips" and was surprised when they gave her a bag of potato chips.

The tour is fun and starts with requiring everyone to cover their heads. If you don’t have a hat of your own, you wear one of the silly looking JellyBelly hats (quite fetching on Peggy, actually). 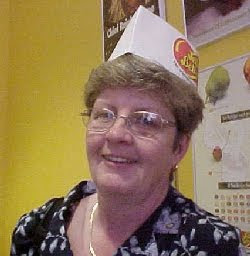 It’s difficult to wander along the maze of second floor walkways, looking down at the men in white all shuttling candy hither and thither, spraying vats with flavoring, etc., and not want to burst into a chorus of Oompa Loompa from Willy Wonka and the Chocolate Factory.

At the conclusion of the tour we took pictures of jelly bean art and then got back in the car to drive to the outlet mall.

Peggy. A mall. Cheap prices. A marriage made in heaven. We spent about an hour and a half wandering around the outlet mall, looking at luggage, clothes, and shoes. We spent the most time at one of the shoe outlets, where Peggy was trying to find some sandals. A lot of laughs about the various styles and in the end when she decided she hadn’t found anything she liked, we giggled a lot as she realized she didn’t remember where she put the shoes she was wearing when she came in and we were afraid she might have to buy back her own shoes.

We had a couple of hours to kill, so we came home and relaxed a bit (e-mail for me, cigarette for Peggy, each to our own addictions) and then we were off to Dinner at the Dump. This is a Davis institution for many years and is a fund raising event, with 100% of the profits going to a local charity. You pay $12 to enter and once inside can eat and drink as much as you want. Most of the local restaurants (including fast food joints like McDonald’s) contribute food and the choices are vast and eclectic. I think my dinner consisted of French fries from Murder Burger, sesame chicken and fried rice from one of the Chinese places, fruit salad from a health food restaurant, a churro (Mexican fried pastry sprinkled with sugar and cinnamon), an ice cream cone, and then a barbecued sparerib. 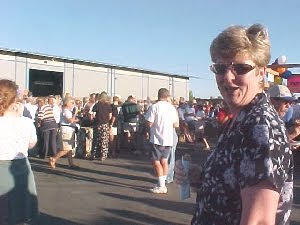 We ran into several folks I know and Peggy discreetly walked away each time, in case I forgot the name of the person to whom I was speaking (as I sometimes do!). The first people I saw were in the recent production of Chess and took me to task for getting some facts wrong (I identified the American as the challenger and the Russian as the champion, when in fact it was the other way around--though the only way I had of knowing that was from the Internet, which had the identities reversed). I was also informed that the director had changed the ending. Well, how the hell is a reviewer of a show that has so many different versions supposed to know that if the director doesn’t tell her that??? I was indignant in my defense of my review, placing the blame for inaccuracies in the lap of the director who didn’t choose to give me any information whatsoever.

Walt finally showed up, but by the time he got there I was really tired of standing, so we told him we were going on home. We’ve just been relaxing around here since then, but Peggy is now in her element ‘cause we found a baseball game for her to watch (she’s an avid baseball fan).